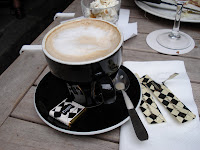 So where does Existentialism fit in with astrology? Existentialism focuses on the process of becoming an authentic human being in a world that appears to be devoid of a benevolent God. It offers us a place to stand that doesn’t throw us into a place of philosophic despair, but instead tenderly holds our humanity and proselytizes courage instead of dogma. And in some ways, I see it as a precursor to astrological thinking.

If we see existentialism as an unsettling inquiry into the nature of life, and if we see it like many others have, as a sense of disillusionment and philosophic “dread,” then we might also see it as a beneficial stage in acquiring sound astrological thinking. In the past it has been seen as a dark night of the soul time, or a “morning sickness” or as Jean Paul Sartre said, nausea” in response to the inauthentic life of mainstream culture. I would venture to add that it feels like the place in our philosophic journey where we question our life and don’t try to insert easy solutions. We wait, we try to live authentically, and we work at becoming a person of integrity.

Existentialism can also be seen as a stage in the process of spiritual evolution if we see it as a reaction to the fantasy of ungrounded beliefs, hyped-up nationalism or pre-packaged religions. It can even perhaps be seen as a stage, like pregnancy, that is preparing for something greater. I see it as a philosophic stance between the naïve acceptance of unquestioned religion and the acceptance of the mystery of spiritual gnosis, or knowledge based on experience. This “existential” way of seeing and being seems to come before any openness to a “greater mystery” which could be described as the perennial philosophy that lies at the heart of every religion.

The willingness to be open to an experience of the “numinous” ---which could be understood as a sense of the holy or the presence of Spirit--- requires an attitude of both openness and critical discernment that existentialism often contains. (Although not all existentialists would agree---they’re an unruly bunch!) For those of us who do astrology, we struggle to discern what is real and useful and true, while also holding to the place of acceptance of the cycles, life rhythms, and the numinous idea of synchronicity. And we offer our clients an open “weltanschauung” or world view that allows them to place our ideas within their philosophy. So we can see astrology as not being a religion but an intuitive art of the Spirit where we can track the movements of Spirit in time.

I see astrology as being balanced between an attitude which is both Saturnian in its efforts at discernment and Neptunian. Existentialism is Saturnian in its no-nonsense approach to the harsh realities of life, and although the art of astrology is more Neptunian, it doesn’t make a case for a God of a certain creed or fantasy. Astrological thinking instead implies that in this Saturnian world we are poised and resonating in a balance between the heavens above and the earth below, and that here there are cycles, seasons, and predictable movements that allows space for Neptunian mystery.

Some people would say this is a ‘stretch’ but I like to think of the idea of existential astrology as the initial philosophic place we stand in, and from there one goes forward into one’s own Neptunian or astrological cosmology. I’ve chosen to embrace “evolutionary astrology” which posits the belief in reincarnation and the evolution and growth of the Soul through time---but this is not for everyone.

On my spiritual journey, existentialism played a crucial part in my transition from Catholicism to a belief in the Soul’s evolutionary journey. After leaving Catholicism I lived and waited in an existential space until life and astrology began to show me more. And what opened up for me was an awareness that the numinous spirit could never be bounded or understood completely by any one system or religion or even astrology. However, how delightful it was to find that there are prints left in the sand from the path of Spirit! That there are clues in the heavens and the seasons and the archetypes as to how to navigate a life. The markers are all around us, and astrology is one such pathfinder. The existentialists have a favorite mantra: “existence precedes essence” implying that we are always in the process of becoming who we truly are. I would add that living an astrologically aware life helps us to discern the essence of who we really are, thereby making the process of “becoming” a conscious one--and that is indeed a profound gift.
© Elizabeth Spring www.elizabethspring.com
Posted by Elizabeth Spring at 9:32 AM