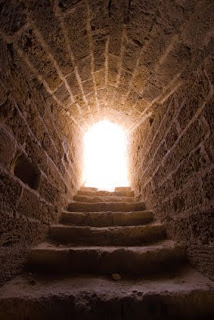 
I got a call from the British hospital late last night about Sophie. She had gone on “pilgrimage” to Lindisfarne—which she’d never told me about— I had no idea that her dream to walk to the Holy Island ‘through the waters’ to her sacred site meant crossing dangerous undertows of incredibly fast tides. I had no idea she planned to walk at night, by herself through the waters—it was a New Moon last night, and it must have been very dark. I still don’t know if she knew how many “pilgrims” had died this way; people like her, who didn’t swim, and got caught in the undertow.

Was she risking all for God? Was she depressed? Manic? Suicidal or---“enraptured”?

I’m leaving tomorrow….they said she had a concussion and was barely conscious by the time someone found her and pulled her out of the water—she had lashed herself by her belt to a pole that wasn’t that far from the island.

I feel so ashamed. I never told you that my daughter, Sophie is a Christian fundamentalist; the ‘only daughter of an astrologer’—ah... I feel Sophie must feel ashamed of me. Why do these beliefs come between us? Why did she go there? Was she hoping to become more…..faithful?

Will write more when I find out what’s happened….I’m off to England, to Lindisfarne, to the nearest little hospital in “Berwick-on-Tweed”. I wonder if they contacted her father, Alistair too—I can’t imagine seeing him again after five years….and meeting him this way.