Astrological Symbols and the Greek Inscription on Jung's Bollingen Stone 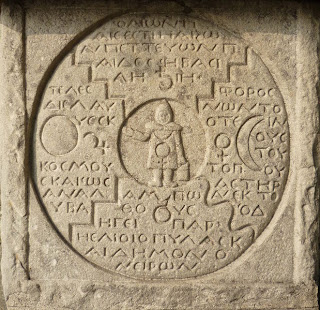 Knowing that I’d have to leave Sophie and Zurich the next morning, we spent a few hours wandering the old city in search of the perfect “parting” gift for me to give Sophie. What I found was a little framed photograph of the “forgotten stone” carved by Carl Jung at his private sanctuary at Bollingen. It’s full of carved astrological symbols. At first, Sophie thought it was a strange little image.

“I don’t have a cross as a talisman of the astrological mysteries,” I tried to explain, “Or a symbol of my spirituality, but this stone mandala comes pretty close. It’s called the ‘forgotten stone’ because it was left at Jung’s house by mistake, by men who were delivering supplies from a quarry nearby to his home. When they remembered the large square stone they’d left, Jung refused to let them take it, saying ‘No, it has found its way here.’ And in honor of his 75th birthday he carved into the stone….”

Sophie looked at it closely, as I continued: “You see first, it’s a mandala divided into four; the number of wholeness. In the center is a little monk holding a lantern—some call it a ‘homunculus,’ which, in ancient texts, meant ‘the little man inside the brain’. And if you look closer, you’ll see that he has the astrological sign for Mercury on his robe. It looks like a pendant he’s wearing. And this is the sign of Mercury, or Hermes, who’s the one who links the outer world to the inner world. Heaven and Earth. God and man. He’s the one who communicates. Everyone has Mercury in their own astrological someone where…doing something. And if you know what sign and aspects Mercury takes in your chart, you learn a little more about yourself.”

She looked curious. “You once told me that my Mercury was in Scorpio, and that it meant I loved delving into the hidden and invisible worlds…..interesting! What do the other astrology signs and writing mean? Sophie asked, pointing to the glyphs.

“On his right side of him you’ll see the astrological signs for the Sun and Jupiter, and on the left: Venus and the Moon. These relate to what Jung called “the alchemical sacred marriage” of the male (Sol) and female (Luna). Jupiter is grace, and Venus is love. The planets across the horizontal line—just like the horizontal line on the cross hint at a receptive grace, and the vertical axis points to human pain and striving. On the top here, is Saturn, and beneath him is Mars. These ‘yang’ signs represent the struggle to live on this earth—the resistance of Saturn and the assertiveness of Mars. Together the planets in the four quadrants tell a story….and Jung believed all “the opposites in our nature”, even of good and evil were intimately related and inseparable. He even felt God and man needed each other, in a sense, to be whole.”

Sophie reached across the table and touched my hand. I felt a little unnerved, because her gesture went so far beyond anything I had said. But she simply said: “Go on….”

“…and look here at the Greek writing around the center; the translation’s under the photo: ‘Aion (time) is a child at play, gambling; a child is of the Kingship. The man who accomplishes, the homunculus, traverses the dark places of the world, like a star flashing the deep, leading the way to the Gates of the Sun and the Land of Dreams.’”

“It reminds me of Jesus saying that we must become like little children again to enter the kingdom of heaven,” Sophie added smiling.

“I agree…truly, here’s another human on a cross, and he’s trying to communicate a great mystery….through symbols.”

And I did. And I had no words for it.

And that’s what happened today, Kendra—! I’ll write tomorrow when I’m on the plane back to the States.

Email ThisBlogThis!Share to TwitterShare to FacebookShare to Pinterest
Labels: astrological symbols and the Greek Insdription on Jung's Bollingen Stone