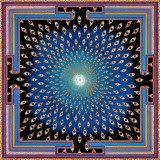 When someone asks what work I do, I always have to summon up a little extra courage before answering "I'm an astrologer." And the reaction is usually the same. "Really?" they say, and then after a pregnant pause and intense eye contact, they either quickly change the subject, or ask with raised eyebrows—"So how long have you been doing it?" When I say I started studying thirty-eight years ago, I often see a shy smile and hear their confession: "Well, I always wanted to try that, although I don't know if I believe."
That's my cue to say that I don't know if I actually “believe” either! I don’t put much stock in newspaper or internet horoscopes, but I find them fascinating. I take them as a theory, and then look to see if my experience matches what they say. I'm actually quite a skeptical person, and I do know that I don't believe in any woo-woo vibrations from planets, and I don't care if Pluto has been demoted by the scientists, and I’m simply not interested in trying to prove astrology to anyone—but I am interested in explaining it.
And then I hear myself saying: Have you heard of the concept of synchronicity? Do you know about the Swiss psychiatrist, Carl Jung? Do you know about the Nodes? About then I know I'll need to have another cup of coffee because the conversation isn't going to end quickly. People are curious and they want to know more.
In 2003, according to the Harris Poll, 31% of Americans believed in astrology. That is roughly 100 million people; 1/3 of the almost 300 million people we are in this country. I don’t know what the figures are now, but in this year alone, Americans will buy approximately 20 million books on astrology—which is 4 times the numbers of such books they bought two years ago. But still—it’s the black sheep of the family in most circles. And that is because astrology, like religion, or alchemy or even the nature of love, is something that rational reasoning and scientific inquiry will never be able to prove.
I can easily accept the hypothesis that astrology, may not be verifiably 'true' at all, and that the planets in the heavens are simply the names we give to deep psycho-spiritual processes. But when astrology is dismissed glibly by people who have never experienced it, it’s more than annoying.
So why does it work? It appears to be a richly symbolic language of the Soul that defies reason. And it works, as said before, not because of any woo-woo vibrations of the planets, but for two reasons. One, because when we ask questions in a spirit of sincerity I believe the Universe conspires to show us answers if we listen well. It follows Jesus’ law: “Ask and ye shall receive.”
The second reason is because of the grace-filled principal of synchronicity. The philosopher Plato, and the late Swiss psychiatrist, Carl Jung, developed this theory of synchronicity, which literally means "united time"—'syn' means 'to unite', and 'chronos' means 'of time'.
Synchronicity is the theory of meaningful co-incidences in which there is no rational causal connection between event A and event B. But instead there is a meaningful relationship—and as Carl Jung noted, one's birth time and place is a truly meaningful synchronistic event, and that astrology works because of it. He once said that "We are born at a given moment in a given place and like vintage years of wine we have the qualities of the year and of the season in which we are born." Jung didn't understand the mystery of this process, but found that by experience—that astrology simply works. So he used it in his analysis with clients, even though he was often reluctant to talk about it because he feared professional criticism.
But here’s a good question—what about those twins or quadruplets all born at almost the same time, to the same parents, and in the same place? Since their charts will look so similar, what’s the difference? They are each different and unique Souls. So the incoming story of each baby Soul here will look similar on paper, but we don’t know how these Souls have lived out their past life karmic stories. They probably had similar challenges, and perhaps want to re-incarnate with Souls they’ve known before, but the essence of it is that they are each bringing in variations on a theme, and in this life they’re going to play out variations on a theme. Their Nodes will look similar—their responses will be different. (To be continued...next post! )
Book sales and enquiries about "readings." www.elizabethspring.com
Posted by Elizabeth Spring at 10:06 AM