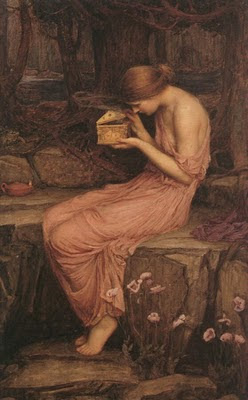 The mythical Pandora and the Biblical Eve both had a curiosity to know the truth, and were willing to go outside limits and look inside hidden and forbidden places to find deeper truths. Do you know what was in the bottom of Pandora's box? It was hope.
Their curiosity was a symbol of the human search for wisdom and consciousness. They chose to know what was real and true rather than to live a childlike fantasy. Because they sought to know what was beyond the obvious, they began the journey of consciousness, knowledge and wisdom.
I find the stories of Pandora and Eve to be poignant and courageous. The struggle to achieve consciousness is tied to duality--there is suffering in the journey as well as freedom from ignorance. I respect the fact that Pandora, like Eve, was told not to disobey orders from the gods--and that they chose consciousness over naivete. I like that "Hope" was there in the bottom of Pandora's box. ~
I'm working now to balance time between writing and do readings/counseling again, and I apologize for not being able to personally answer questions from readers. I hope that my book, "North Node Astrology: Rediscovering Your Life Direction and Soul Purpose" available only on www.amazon.com will answer some of those questions for readers interested in the Nodes and the life transitions that they are experiencing now. I believe their is much hope and wisdom in our personal and collective journeys. I am an eternal optimist, and for those of you who would like to have a phone session, the details are on the homepage of www.elizabethspring.com
And why the thoughts on Pandora? Simply because our journey is filled with all manner of dualities and it's the symbolism under the literal interpretation of our lives that is so important to look at--what's the lesson here? What's the truth? And...isn't it sometimes quite beautiful, just like Waterhouse's painting of Pandora? I think it is....
Posted by Elizabeth Spring at 8:24 AM 4 comments: