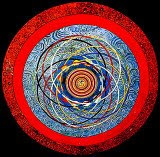 The astrological chart sometimes reminds me of a 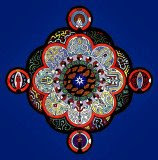 round conference table, with all the planets, or internal voices, or “gods” sitting around the table, at a committee meeting. The lines in the center of the “table” represent the lines of conversation between the different voices in our psyche, or parts of our self. Your Sun can be seen as the chairperson of the board meeting—of the often riotous committee it tries to bring to order! Each planet represents a different aspect of oneself: the Moon is our emotions, memory, and nurturing instincts, Mercury, the communication ability, Venus the feminine and the anima, Mars the masculine and animus, Saturn, the reality principle of the Father and Cronos, and the outer planets of Uranus, Neptune, and Pluto representing various aspects of the unconscious.

However when our lives—that is, when the map of our reality, as represented by the chart, no longer echoes the terrain of the chart, then all kinds of neurotic pain can erupt. Jim Hollis, a Jungian analyst and writer once told a story about a woman with a history of great suffering, and at midlife her world tumbled even more. She described her ordeal as feeling “fragmented.” When he asked this woman what she did when she felt fragmented, she answered in terms which told him that she would make it through to a more authentic life. She simply said “When this happens, I talk to this part of me, and then I listen. And I talk to that part and I listen. And I try to learn what Psyche wants of me.” This woman was assisting the dialogue between all the various parts of her psyche---she was honoring the gods within, rather than trying to silence or distract them. She wasn’t becoming a prisoner to unheard and cut-off parts of herself. She was attempting to give voice all the various personalities within her, or as an astrologer might say--she was discovering the committee within her, and she was finding meaning in the conversation. What a wonderful mandala the chart is—what a unique way to observe our Self! And like the ancient “astrolobes” with the arrow piercing through the center, we find the North and South Nodes piercing our charts, and giving direction and meaning to the committee within us….. ~elizabeth spring http://www.elizabethspring.com/

Posted by Elizabeth Spring at 8:06 PM