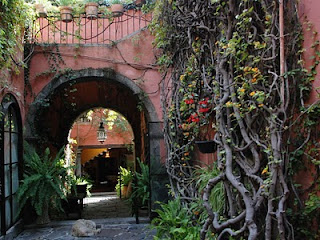 I look at the photo of this gate and wonder how I can possibly walk through it into the next stage of my life. I wonder how transiting Saturn conjuncting my Libra Sun, Neptune and Venus now will play itself out. Melancholy and disillusionment? Or becoming a “wise old crone”? I don’t feel that old, yet they say Saturn “ages” one….Saturn conjuncting Neptune can be illusive and deceptive, either in the birth chart or by transit. It worries me….

Mother’s funeral is over and I’m glad we had the chance to heal our relationship at the last minute—the simple grace of an “I love you” said at just the right time. But in coming back here, I lost the chance to reunite with Alistair in Switzerland. Alistair and I have now been separated five years! I feel so alone. Here was our chance to see if the stirrings we felt in our hearts could lead us back together. Here was our chance to see if our hearts could triumph over our heads…if we could forgive each other, and truly find out if our story isn’t over yet. But we didn’t get the chance; I had to come back to mother.


It’s torture to feel the chance of love igniting, and then to be cut off from that chance. Instead, I’m back here at my Newport office, at my “little study” doing readings and life is seemingly going on as usual. But it isn’t. I feel like I have lost my chance, and Alistair has chosen to stay with Sophie in Zurich rather than come here to be with me. It’s understandable—he wants to spend time with his daughter who he never sees! But I’m jealous of their time together, and so lonely. It’s hard to be betwixt and between things, because my “head and heart” is so unsettled. I’m a confused Libra for sure.

But yesterday—yesterday!!! I don’t know now if it’s better or worse, but Tomas, my old mentor-rescuer-healer-friend re-appeared---unexpected. Who is he to me?? The man who saved me during the separation from Alistair? A spiritual guide? Simply my old therapist who has become a friend?

He just showed up, after five years, without even calling. He said he was just walking by my office. But I wonder if I had been on the second floor—?—instead of having an astrology office that looks like a retail shop that anyone can just walk into—I wonder if he still would have just ‘dropped by’? Maybe. He’s an Aries, and they can be impulsive and daring. Aries is learning courage and they get lots of chances to find it….life stresses them into going beyond what they think they can do. It’s admirable really; like beginner’s mind. Some people find Aries to be somewhat arrogant, but it’s an ego-arrogance that appeals to many women. The romance novel hero. Hah! Alistair’s “arrogance” was of a completely different nature.

But….I could have fallen into Tomas’ arms when I saw him outside the door here. It’s been so many years, and it was so…..what? ---soul-satisfying, I guess. We sat together for over two hours, rocking and cogitating in the green ‘rockers’ by the window and staring at the afternoon sunlight striking the leaves on the red maple tree. He was smoking his pipe as usual (I must admit to loving the smell of black cherry) and he was wearing the same black cowboy boots he used to wear, and carrying his bag of books. I brewed us a pot of Earl Gray Tea. He told me he’s into playing Irish music now, the Irish drum and tin whistle. Seeing him felt like something was coming home again. ~ ©Elizabeth Spring www.elizabethspring.com
Posted by Elizabeth Spring at 12:40 PM